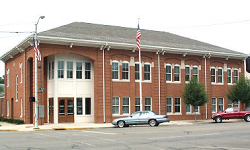 Chief Charles Phelps oversees a department consisting of 43 sworn officers, 1 civilian employee, and 2 part-time/temporary staff. The department itself is divided into 3 separate sections: Patrol, Detective, and Administration. Access the department Organizational Chart for more information. A captain commands each of these sections and, even though they are distinctly different in their responsibilities, they all work together to provide the citizens of Troy with the highest level of professional services.

Captain Shawn McKinney is the commander of the Patrol division with a total of 6 sergeants who report directly to him. They are Sergeants Jesse Canan, John Marshall, Dominic Burnside, Ryan Ormberg, Joel Misirian and Matt Mosler. They are in turn directly responsible for a shift of up to 10 officers. These are the officers and sergeants that most citizens will recognize as the initial responders to their calls for assistance. The 3 sergeants and their shifts provide the citizens of Troy with continuous 24/7 coverage. In addition to their regular duties as a patrol officer, several of the officers have received additional training as Evidence Technicians, Bike Patrol, Tactical Response Team members, and Accreditation. The Troy Police Auxiliary, which is authorized up to 25 members, is a group of non-sworn volunteers who assist the police department and its members in activities and service related to police operations.

Captain Jeff Kunkleman is the commander of the detective division with a total of 7 officers reporting directly to him. There are currently 3 detectives, 3 D.A.R.E / School Resource Officers (SRO), and property room manager. The detectives are those officers that investigate most of the lengthy and time consuming cases along with all of the major incidents that occur within the city. The D.A.R.E / SRO officers teach the D.A.R.E curriculum (Troy D.A.R.E Program) at all of the elementary schools along with serving as School Resource Officers for the Troy Junior High and High School.

The Administrative Captain, Zac Mumford, is the commander of the administration division and supervises civilian employees. Within this division fall the civilian records clerks who work normal business hours and are the people that you are most likely to encounter if you happen to stop in or call the office Monday through Friday. Also within this division are the building superintendent and the parking control enforcement officer. The building superintendent is responsible for the day-to-day upkeep of the entire facility along with any special projects that may be required. The parking control officer can usually be seen patrolling the downtown area enforcing the various parking ordinances of the city.

In addition to being located in a modern, well-equipped building, the Police Department also has a processing area for suspects, a training / classroom and a fitness room with men’s and women’s locker rooms. On the technology side, the department currently maintains a LAN with high-speed Internet and email for most personnel and access to digital records with central storage. All departments contribute to provide the information contained in the Police Department online resources. Marked police cars are also equipped with notebook computers and in-car video systems.
View All
/QuickLinks.aspx
Agendas & Minutes
Calendar
Utility Billing & Collection
Maps / GIS
Report a Concern
Forms & Documents
Public Bids
Council Chambers
Live Stream
[]